Obama’s Family Trip To Africa Will Cost Us $1000 Million Dollars!

This Trip Will Be The Most Expensive In Presidential History 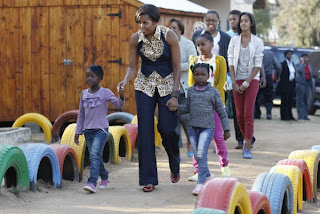 Our School children will not be able to take a tour around the White House because of Obama’s  sequestration, but  Obama and his entire  family will be touring Africa for the estimated price of somewhere around $100 million.
This “little” family jaunt will include the air transportation for 56 vehicles, 14 limousines to be used in a parade,  trucks carrying bulletproof glass to install at hotels,  two ambulances one for dealing with biological and chemical contaminants, and one with x-ray equipment, 100 Secret Service Agents for the first three cities on the itinerary, 65 agents at the fourth, and 80 to 100 more to guard the Obama family 24/7. Also a U.S. Navy aircraft carrier functioning as a hospital comes with the package, and fighter jets will patrol the area 24 hours a day, for everyday that they will be there..

This is another prime example of how out of touch, how unconcerned, and how indifferent our president is with average, hard working American people.  And how Inept, Incompetent, and Arrogant he is.  And this is who we have representing us? What an embarrassment!
Did you read that folks?  Think about it, you are going to be paying $100 million for Obama and his family’s trip to Africa and you won't even get a Tee-shirt. I wonder how much  Mooshelle’s wardrobe is going to cost us?

On another thought, seriously, could this  trip be a distraction to take the publićs attention away from the all the scandals.
Also, I wonder how much having more Security in Benghazi would have cost ?
Posted by The Debonair Dudes World at 9:11 AM