Where was Al Sharpen and his gang of PIMPS then?

A week ago, in Tulsa, Oklahoma, a black kid named Tyrone Woodfork severely beat an elderly couple, a Mr. & Mrs. Strait, who had been married for 65 years.  Tyrone RAPED Mrs. Strait, and she died of injuries received at his hands. Mr. Strait served in the 101st Airborne during WWII. NO national media carried the story. Tyrone was arrested yesterday.
I supposed that if Mr. Strait had shot  Tyrone, the whole country would know about the story. As it is, only Mrs. Strait died, so it's not of interest to Brian Williams and the rest of the main stream media media.

Think about it. After 65 years of marriage. After serving our country. After 90 years of life, Mr. Strait has lost his wife to a rapist/murderer. NO ONE in the national media gives a flip. They're interested in their wonderful hero, Trayvon Martin. 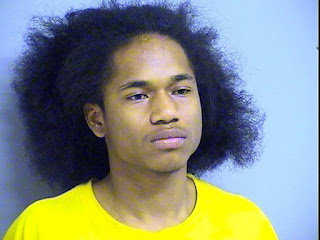 Would have Obama's Son looked like Tyrone Woodfork?
Man charged with murder in deadly home invasion
Tyrone Woodfork, 20, was charged in Tulsa County District Court with felony first-degree murder, two counts of robbery with a firearm and first-degree burglary.
Bob and Nancy Strait were assaulted March 14 in their home in the 3300 block of East Virgin Street. Nancy Strait died March 15 from injuries related to the assault. She was also raped. Bob Strait is still recovering from multiple injuries and has been re-admitted to a hospital.
Woodfork was arrested March 15 after witnesses reported seeing the couple’’s stolen 2001 Dodge Neon in the 3500 block of East Fourth Street. He remains in the Tulsa Jail without bond.
By JERRY WOFFORD World Staff Writer


Despite the violence, cruelty and the RACISM of THIS particular crime, it was strictly a local story., never did make the national news nor did the usual Race Pimps march and protest in the behalf of Nancy Strait.  Yes, there was one angry neighbor who set up a Facebook page called “JUSTICE FOR BOB AND NANCY STRAIT.” When I last looked, it had 60-some followers, but that’s about as far as it went..

So what does all of this mean?  In the Trayvon Martin case, the entire Nation was out there protesting and shouting and marching with Al Sharpton or as I prefer to call him the Race pimp. But in the Bob and Nancy Strait case, the whole nation including the usual Race Pimps are silent.

And just for the record, President Obama has not mentioned that Nancy Strait could have been his grandmother.

Posted by The Debonair Dudes World at 8:29 AM