Today Friday, starts the  Memorial Day Weekend and what will we see this weekend?

The purpose of Memorial Day is to remember those who died in service to our country. It was originally called Decoration Day because of the tradition of decorating the graves of the fallen men and women who have so bravely given their lives for their and our Country.

Hot Dogs and Burgers on the Barbecues,TV Movie marathons, Hot Dot Eating, and Beer Drinking  contests, Baseball Games and other Sporting events, Atlanta, GA. will be holding a Jazz Festival, Big Holidays sales at the Malls, Military Jets will fly low over Sporting events and Beaches, and of course the running of the Indianapolis 500, and if the weather holds out, Memorial Day weekend also marks the beginning of the Beach season.

The main purpose the Memorial Day holiday is remembrance and commemoration of members of the United States military who died while serving their country.
Has the term "Freedom" been forgotten?. The Liberals totally enjoy the freedom bought for them with the blood of our brave patriots, who once again volunteered to serve our country, and the millions of them who have fallen while doing so?   Have they forgotten the families who are still morning on this very day?  And do these non-deserving  people appreciate it! 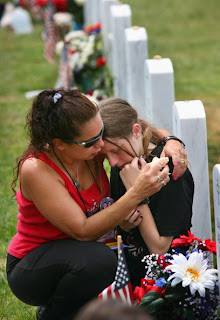 Yes, Memorial Day is a day of remembrance, a day to remember  those who have died serving our country. This is a great time to honor our veterans, past and present. And yes it's a Federal Holiday. A Holiday for us to attend one of the many parades to honor our veterans, a day to fly our Flags to show that we honor our veterans, and many of us will visit the cemeteries where our Fallen Hears or resting. The barbecues and the sales at the Malls can wait. To bring things into their proper perspective, there are 250,000 graves at Arlington National Cemetery alone, and there are volunteers there who place an American flag on each and every grave in EVERY National Cemetery, in183 cemeteries in 27 states just in case nobody else does.  I wonder how many people know that?)  Yes the American Legion who sells those poppies on the corners, and in the Malls and shopping centers  do more then just collect money in a can. The poppy has become the Memorial Flower of the American Legion since 1919 when poppies bloomed on the battlefields of France where so many of our men had fallen in battle.
The American Legion has collected more than $2,000,000 since then and every penny  is devoted to Veterans Affairs and Rehabilitation work by  The American Legion  which includes aid to needy veterans and their families.  So don't think for one minute that you are giving your dollar to a scram.
And here's another fact that I bet you didn't know,
On Memorial Day the American flag on each and every Governmental Building and in the Squares is raised briskly to the top of the Flag pole  and then slowly lowered to  half-staff where it remains only until noon. It is then raised to full staff again for the remainder of the day.
The half staff position remembers the millions of men and women who gave their lives in service of their country and ours . And at noon their memory is raised by the living, who resolve not to let their sacrifice be in vain, but to rise up in their stead and continue the fight for freedom,  liberty, and justice for all.  That's a fact that not to many of us are aware of.
My friends, I myself am a former soldier,as many of you who are reading this are. And let me say this, the mission of the American military is to protect the USA and all that is stands for, to protect our freedom, our liberties, our free speech, and justice for all. As well as everything else that is laid out in our in the Constitution.  And to keep this Nation from becoming a dictatorship.  We have kept this Nation strong and kept our freedoms because of the blood of our brave patriots.  Don't let them down.  If Obama gets reelected this Nation that we all love will be finished as we knew it, and you know it.
And to those who enjoyed and had no problems bashing George Bush  for eight years, I say deal with it!

People sleep peaceably in their beds at night only because of the brave, rough and ready men who stand ready to do violence on their behalf.

Posted by The Debonair Dudes World at 8:59 AM