You Say Tomato, I Say Jalapenos. 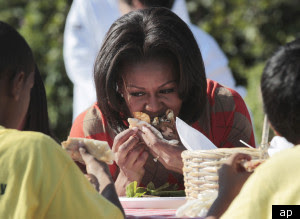 Moocheel Obama Is at it again.  The government has declared it's OK to eat tomatoes again, lifting its salmonella warning signs that the outbreak while not over may finally be slowing down....(for now).
Officials reiterated earlier warnings that the people most at risk of salmonella should avoid hot peppers jalapenos and serranos. So there goes my love for Mexican food!
Holy crap, can't they leave me alone !!!
The government still doesn't know just what caused the salmonella outbreak, and the new move move doesn't mean tomatoes are cleared. Opps, I guess I spoke too soon.
First they told us there was good evidence linking tomatoes to the sickness, so I was very careful about the ones I was eating. (the vine type etc.) but now it's unlikely that any tomatoes were the culprits at all. And all this time, the real villains are those loveable little green hot jalapenos. But, they say that it only applies to peppers grown, harvested or packed in Mexico. Are they kidding? How the hell are we going to know the difference? Are the little suckers Stamped, Made in Mexico? I don't think they are.
Any way the FDA is telling us, (as if we didn't already know) Wash your hands thoroughly with soap and warm running water before and after handling fresh produce!
Hey tell that to the Freaken Mexicans that pick and handle the stuff, not to me!
My cat is still pissed off at me from the last Cat Food FDA crap!
When tthe FDA puts Vodka on the list, I'm moving to Mexico!

And by the way, Barack can't get involved with any of this, he has more than enough on his plate right now!

Posted by The Debonair Dudes World at 1:30 PM