Has America Lost Its Mind? 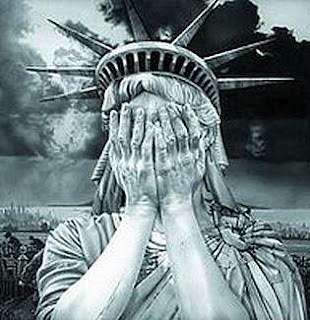 Why would anyone want to vote for Barack Obama?
I'm sure that you heard that saying before, but if you haven't I'll repeat it.
"If you voted for Obama in 2008 to prove you're not a racist,
you'll have to vote for someone else in 2012 to prove you're not an idiot."
Did you vote for him because of the the endless promises of freebies?  Or to prove to yourself that you were not a racist?
Or maybe because you wanted to expand the wars in Iraq, Afghanistan, to Libya, Egypt, and possibly Yemen, and Syria?  Or was it the expanding of the TSA?
There are so many reasons why NOT to vote for Obama, it is difficult to know where to begin.
To me Obama is nothing but a Liar & a Con man, and that was transparent from day one. .
I VOTE Republican because I have not found a democrat  worth my vote in the past 25 years or more. Or one who even comes close to represent my interests.   And  because I haven’t found a democrat  that actually follows through with their campaign promises, seems 100% trustworthy, and actually seems to have my best interests at heart – and the best interests of every hard-working, decent, “legal” citizen in my town/county/state/country. The democratic party  has been increasingly looking the same with  scandals, bribes, giving ‘hand-outs’ to the LAZY (I didn’t say the deserving: elderly; legitimately incapacitated in some way, people, or innocent children; etc…) There’s people who abuse the system all over the place and, frankly, I’m tired of working hard/balancing my personal budget to live ‘within my means, and ONLY having children that I can emotionally/spiritually/mentally /physically/and FINANCIALLY support. I respect myself, my family & friends, my home/yard, neighborhood, etc…and I’m SICK/TIRED of those who don’t. And that is the only kind of candidates I have found to be my representing the democratic party these days.
Voting for the lesser of two evils in the Democratic party is still voting for evil. All the democrats offer me a refuge for failed classless clowns.
Let me ask you the following questions. Would you want to trust your life savings to a group of people who can’t even manage their own budget?  Would you trust your investments to a stock broker who has a record of consistent failure in the stock market and squandering the investors’ money on his personal interests and himself? Then why would you vote for Barack Obama?

When I first started getting interested in  national politics Nixon was running for President on the Republican ticket.  He was, of course characterized as this evil, conniving, amoral, disingenuous, rabid, slimy,  weasel in a cheap pinstriped suit. But I must say that if he were running today I would vote for the 1972 Nixon in a flash instead of any of the choices given in the Democratic party today, ESPECIALLY the historic First United States Black President Barrack Hussain Obama!
Obama and his administration has proved to be the most heinous group of inept crooks that the Office of the Presidency has ever held, like Eric Holder, Nancy Pelosi, Joe Biden,  Harry Reid and their gang of  lap dog.
Obama’s term in office has certainly divided this Nation more than ever before.
Since his first day in office he  pursued his agenda to “Change” America, to change to a Socialist government, who would take over Health care, the Auto industry, the Banking industry the Housing industry, ... while the economic debacle was allowed to dramatically worsen, his failed policies helped to skyrocket to debt due to his and his wife’s unprecedented spending. Remember those facts when you go to the polls in November.
Posted by The Debonair Dudes World at 10:22 AM