Are Those Progressives TOTALLY Out OF Their Minds?

And the answer is YES!  Those Progressives ARE TOTALLY Out OF Their Minds! 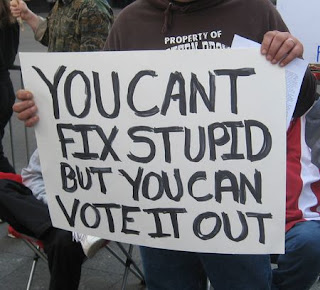 Do you want to hear the height of hutzpah? The arrogance, the nerve, or the Stupidity, I am totally lost for words and that’s not something that usual for me to say. There should be a book named after this SPIN job called “Great Moments in Chutzpah”Here we have the MOST corrupt administration in our history, and these mental midgets these Progressives imbeciles have the gall, the insolence to blame the Republicans for BUYING THE ELECTION IN WISCONSIN!  Did you ever see such a spin job in your life? The economy is weaker than even most analysts thought, the dismal job report showed that there were far fewer jobs in the previous two months than anyone had first thought. The stock market just fell 275 points yesterday , and went up 286 points today. Anybody else notice that Scott Walker won the election today? And if anyone thinks my sarcasm is unwarranted it's because I just got done reading that POS called a Progressive blog!Scott Walker won, the stock market rose 286 points, Coincidence?

There are no coincidences in politics.
The Silent majority,is silent no more! The people have spoken..The MAJORITY of the citizens of Wisconsin told the far left where to go!    Obama is toast
We already know that NO president since the Great Depression has won re-election with unemployment as high as 8.2 percent.  Today's extremely jobs report proves yet once again that Obama's policies simply are not working and that he has failed to live up to the promise of his presidency, yes he has been a complete FAILURE. And all this time I thought that these Progressives, Liberals, Socialists, and Marxists were dumb only because of them blaming us Republican’s for being the Racist party in America!  But no, they are totally dumb in every way imaginable. And after yesterdays Stunning Victory by Scott Walker in Wisconsin, these Obamamaniacs are talking about “BUYING ELECTIONS” something that they invented! And how they “Recently uncovered emails from Romney's term as governor of Massachusetts”They didn’t uncover anything, they HACKED into his emails!  Yes HACKED!  Something that’s CRIMINAL!  The same thing that they through Richard Nixon out of office for. And they are so proud about this that they are blogging about it!  Well, yes, Barack Obama is clueless, and these Progressive NUT-JOBS are even more clueless. They just don’t get it or they are just to ignorant to get it. Obama’s polices are total failures. The man is in way over his head. He is acting out of incompetence! It doesn't take a rocket scientist to know this.And We need to get him out before he totally ruins our country. Obama and all of his dingdongs have worn out their welcome in America and it's time for him and them  to pack their bags and go away forever.
Posted by The Debonair Dudes World at 3:26 PM