Mrs. Obama applauds Mayor Bloomberg, then says she doesn't want to "weigh in" on topic...
In an interview with the Associated Press on Tuesday to promote her new book, First Lady Michelle Obama waded into controversy. Standing beside the White House Kitchen Garden, Mrs. Obama applauded New York Mayor Michael Bloomberg's recently proposed ban on large sizes of soda and sugary beverages. She later issued a statement saying she did not want to comment on the proposal.
This is all part and parcel of the NEW America that Obama is creating!

Obama already told us that he wants to "Reshape" America.
And that he wants to make America into a better place! Hold everything!
Lord have mercy, if he's going to "RE-shape America" more that he already has then I think we are in for a lot more trouble than we already thought.
way back in 1990 Obama wrote about how he really hopes to be a part of “Transformation of this Country.” So he had plans way back in 1990 on becoming President and ruining this country! Sound familiar?

Yes, he told us back then in 1990 that he wanted to “Re-shape American and he again told us that last week, ironic isn’t i? What more does he have to tell us to wake up these Lame-Brain Progressive Idiots? Are we a bunch of Masochists? Do we need an app for that? He told us that he wanted to Redistribute the Wealth, who else but a Socialist would say something like that? Can we call him a socialist now? Can we call him Comrade Obama now? And remember when the First Wookie told us that she had been “ashamed of America” before! I Wonder if she Proud of America now? 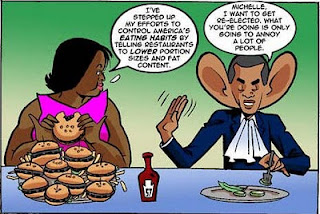 Just more of this Do as I say, not as I do." behavior!   These people  need to stay out of other people's lives!

Posted by The Debonair Dudes World at 8:15 AM